This week we looked more into Bernouilli’s Equation. But to start off with, we had a quick ‘clicker’ quiz to recap on what we have learnt so far, and this highlighted some of the area I need to work on more.

Euler’s equation can be simplified when we integrate along streamlines, or when the flow is both inviscid and irrotational. In either case, we get a form of Bernouilli’s equation: 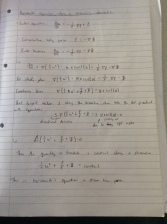 We also touched on Bernouilli’s principle. This is when the body forces are negligible. i.e. Phi=0.

Where C is a constant, P is the pressure, Rho is the density and u is the speed.

Thus an increase in speed gives a decrease in pressure and vice versa.

We used this equation to go through some examples on pilot tubes within an oil refinery and looking at aircrafts to judge their speed.

I’m starting to understand Bernouilli’s equation a little more, but I feel I need to do some examples on this to help further my understanding. 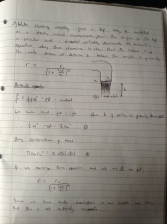 This week we have been looking at Euler’s equation.

If we use S to denote the surface of a small volume V of a moving fluid, the volume moving with the fluid with velocity u. The mass of the volume of fluid is thus Rho*V, where Rho is the density of the fluid.

We can now say that the total surface force acting over S is:

The total body force is:

If we use Newton’s Second Law, the equation of motion of the fluid volume V is:

Now, if we allow the volume V to tend to zero, we get:

And lastly, if we divide through by Rho*V  and taking the limit as V->0 we get:

which is Euler’s Equation.

This week, I feel like I’m starting to grasp more on fluids, and luckily we went over dimensional analysis so I could refresh my memory as we are about to settle down to learn a new topic! 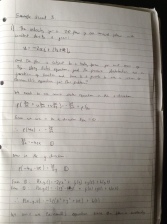 This week we have been asked to do some reading due to it being consolidation week on Dimensional Analysis.

Dimensional analysis provides a strategy for choosing relevant data and effective ways of presenting them. This is a useful technique in all experimentally based areas of physics or engineering. IF we can identify the factors involved in a physical situation, then we can use dimensional analysis can form a relationship between them. The expressions we get from this may not appear rigorous but these qualitative results converted to quantitative forms can be used to obtain any unknown factors from experimental analysis.

In any physical situation can be described by certain familiar properties:

The following table lists dimensions of some common physical quantities: 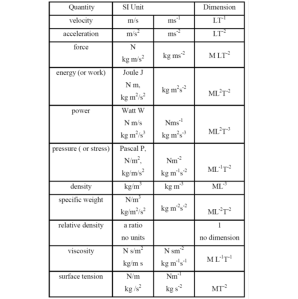 One of the key principles of dimensional analysis is dimensional homogeneity. This is any equation describing a physical situation that will only be valid of both dies have the same dimensions.

This property can be useful for:

We can obtain dimensionless groups by using Buckingham’s Pi theorems which are stated below:

Second theorem: Each dimensionless group is a function of n governing or repeating variables plus one of the remaining variables.

Repeating variables are those which we think will appear in all or most of the Pi groups and are an influence in the problem. There are rules to follow when finding these variables:

Within fluid dynamics, we often take Rho, u, and d as the three repeating variables (although, sometimes we use the viscosity instead of density).

During dimensional analysis, we will be using Reynolds, Froude, and Mach numbers. Some non dimensional numbers are listed below.

Kinematic similarity is the similarity of time as well as geometry. It exists between model and prototype if:

This has the consequence that streamline patterns look the same.

Dynamic similarity exists between geometrically and kinematically similar systems if the ratios of all forces in the model and prototype are the same. This occurs when the controlling dimensionless group on the right hand side of the defining equation is the same for model and prototype.

This week we are looking further into flow visualisation and looking at Stream Functions.

We are now concentrating on incompressible 2D flows (which are flows in which the velocity is in the form (u,v,0). The continuity equation in these flows is:

Suppose that we can find a scalar function

If we say that the streamline is parametrised by writing x=x(s) and y=y(s) for some parameter s, then dx/ds is the tangent vector to the streamline and is therefore parallel to the fluid velocity u at x. Therefore the vector cross product between u and dx/ds is zero. I.e:

We can simplify this down to:

/ds=0 along a streamline and hence

is constant along a streamline. We can then solve the equation of the stream function, and this gives us another method for producing streamlines!

We have also seen the Principle of Superposition which stated if we add two different velocity fields together it has the effect of combining the two relative stream functions together.

Please find below a few examples from example sheet 1: 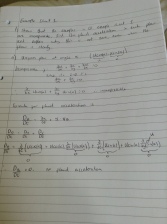 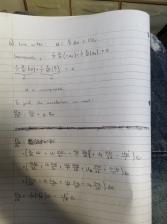 For now, we are moving back to inviscid flows. I will remind myself of what a fluid actually is.

What is a fluid?

A fluid is a substance that continues to deform in the presence of sheer stress.

We can model a fluid with a continumm model, where the fluid properties are defined by:

We can also visualise fluids. One way we can do this is by using pathlines and streamlines.

Pathlines are defined as trajectories of marked fluid parcels. These can be written mathematically:

This can also be adapted for polar coordinates:

Streamlines are defined as a curve which is always tangential to the fluid velocity. These can be written mathematically:

We can now use these equations to calculate fluid flows and we can show the graphically.

We have also seen that pathlines and streamlines are identical if they do not depend on time.

Please find below examples on pathlines and streamlines. 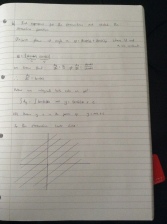 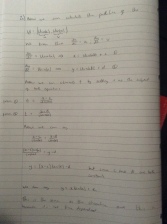 This week I need to work on a few more of these examples and try to find some useful links which would help me understand more about how to display the pathlines and steamlines on a graph.

To start of with, I was really struggling to understand pathlines and streamlines, but since we have been working through the example sheets it feels like I’m starting to understand it more and have a go at some of the harder examples.